What’s it with this tradition of having Brussels sprouts ( same family as broccoli) at Christmas? Love them or hate them? It seems you can’t have a traditional Christmas dinner without them, at least in many parts of the world.

There is a reason that they are a great addition to a meal – read on!

So if you’re not partial to Brussel sprouts, include other members of the Brassica family – broccoli, kale, cauliflower, rocket and cabbage (basically means cabbage) family. 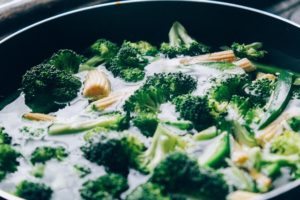 So, why eat brassicas anyway?
Brassicas contain good substances (I3Cs – indole-3-carbinols, DIM and glucosinolates) which help boost the liver’s ability to eliminate and deal with unwanted toxins that we consume – including alcohol and chemicals. Even unwanted hormones!

Liver support
Your liver is your waste disposal unit – it works hard to process and metabolise toxins and hormones, thereby making them safe to be eliminated. The liver needs good quality fuel in the form of nutrients to work efficiently.

Brassicas are nearly unrivaled as a food source for activating glutathione (the mother of all antioxidants) and supporting detoxification of many chemical substances through your liver.  Also, be sure to also include plenty of antioxidants from brightly coloured, fruit and vegetables with the brassicas.

What’s The Role of Brassicas in Hormone Balance
For women the reason these veggies are so vital is that they can help do amazing things in for your body. They actually help promote healthy levels of ‘good’ oestrogens and help remove ‘bad’ oestrogens from the body.

It’s the livers critical role to keeping your hormones in balance, by eliminating the excess oestrogens. The liver uses the I3C’s and diindolylmethane (DIM) in this process.

The wrong kind of oestrogen could be the reason you’re having problems like migraines, food cravings, PMS, infertility, heavy periods, fibroids, endometriosis and other issues related to the female reproductive system.

Nutrient Rich
The brassicas are powerhouses of nutrients including vitamin C, vitamin K, all the B vitamins and carotenoids. Those in the know will say that one could hardly consume enough of these veg in one day to reap all the health benefits, with evidence in both cancer research and liver detoxification.

Brassicas are also very beneficial for the immune, digestive and cardiovascular systems due to their high volume of fibre.

Anti-ageing and Metabolism Boost [Hot off the press]
Scientists have discovered a natural compound NMN found in broccoli, cabbage (edamame, avocado, and cucumber) that has “fantastic anti-ageing effects in mice” – and  that could work on humans. (They’ve now started trialing this with humans)

So far, they’ve seen numerous positive effects on mice – their level of physical activity increased, bone density and muscles improved, the immune system and liver performed better, their eyesight improved and they even lost weight.

As animals get older, they produce less NAD which is involved in energy production in the body. They gave mice NMN to see if this would boost levels of NAD and have a rejuvenating effect.

Asked if this worked, lead researcher Professor Shin-ichiro Imai, of Washington University in St Louis, said: “The answer is basically yes. As a matter of fact, NMN has remarkable anti-ageing effects in mice.”

So watch this space and all the more reason to keep eating broccoli!

Try this delicious Red Cabbage Salad Recipe
My suggestion is to have your fill of brassica veg this Christmas and support your liver. It might be working harder than usual. 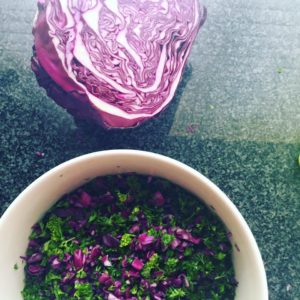 A Word For If You Have Thyroid Issues

In the past those with thyroid issues may have been told that the goitrogens, found in the brassicas, can do their body more harm than good.

A recent assessment published in Nutrition Review looked at the evidence and found – that the usual daily intake is far lower than what could ever negatively affect your thyroid.

This is especially true if you cook them, as it de-activates the goiterogen.
Many doctors, including the most renowned thyroid experts, would say that it’s nearly impossible to consume enough goitrogens to become a real problem. This is true unless the foods highest in this plant chemical ie. Russian/Siberian kale, some collards, and Brussels sprouts, turnips and rutabagas – are eaten daily, as a staple and in the presence of iodine deficiency.

In fact, you’d have to consume over one kilogram of un-cooked or raw vegetables every day for several months before you developed symptoms.

So, yes you can safely enjoy Brassica vegetables, which is good news for you as they really are associated with a wide range of health benefits.